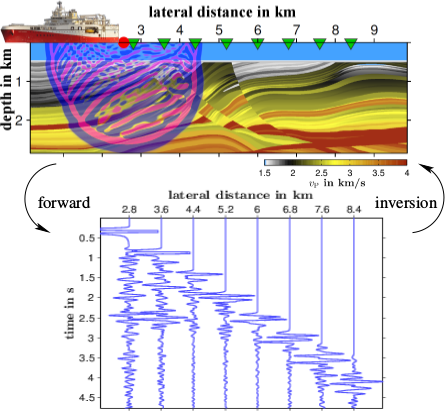 The aim of full waveform inversion is the reconstruction of subsurface material parameters (e.g., the velocity of compression and shear waves and the attenuation of these waves) from measurements of the full elastic wave field which has been excited locally by controlled sources or globally by earthquakes. From a mathematical point of view, we have to deal with a nonlinear parameter identification problem for the acoustic, elastic, viscoacoustic or viscoelastic wave equation. The least squares approach for the full nonlinear problem is called full waveform inversion (FWI). It needs to be regularized due to its illposedness. The resulting optimization problem with PDE constraints is mostly solved by gradient-type schemes which require repeated solutions of the direct and the adjoint time-dependent PDE. This approach became reasonable just recently due to the tremendously increased performance of modern computers. Nevertheless, the approach suffers twofold:

We work on both issues under the following guiding principle: Develop a sound mathematical theory driven by realistic scenarios. And set up regularization schemes adapted to the underlying physics (for instance, preserving discontinuities of the material parameters and taking into account strongly anisotropic and heterogeneous porous media properties).
Some of our achievements in the abstract analysis of the problem so far are:

In particular we came closer towards the goal to incorporate dispersion, attenuation and anisotropy in a 3D setting, thus reducing the gap between mathematical idealization and practical needs by extending the model step by step to a realistic physical scenario.

Open analytical questions we still need to address are:

Concerning the computational aspects of the inversion, we construct implicit hierarchical space-time discretizations leading to efficient parallel schemes for solving the direct problem and for evaluating the Fréchet derivative of the parameter-to-solution map and its adjoint.

So far we achieved the following in this field:

Challenges in the numerical parameter reconstruction to be addressed next are: 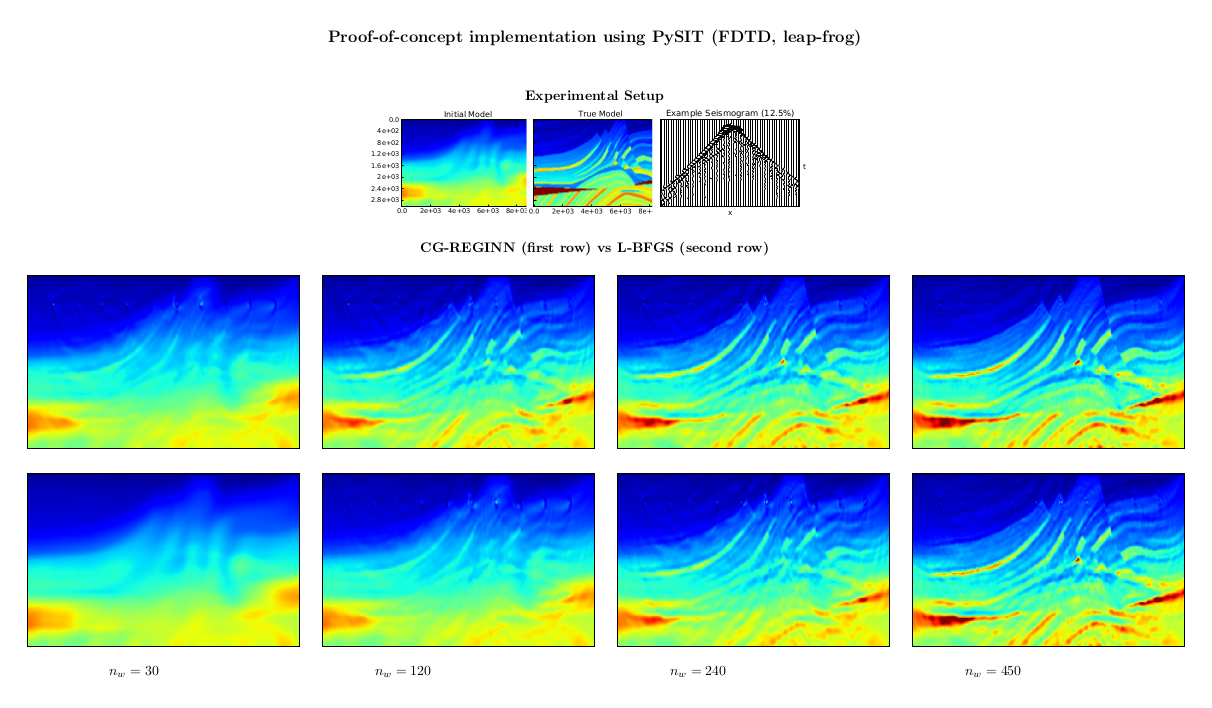 Our vision is to realize highly reliable reconstruction algorithms complying with industrial standards. To this end, we combine up-to-date techniques for inverse problems with massively parallel explicit and implicit direct solvers for the coarse level of adaptive hierarchy space-time discretizations which allow for locally very exact resolutions and provide efficient coarse approximation for preconditioning.