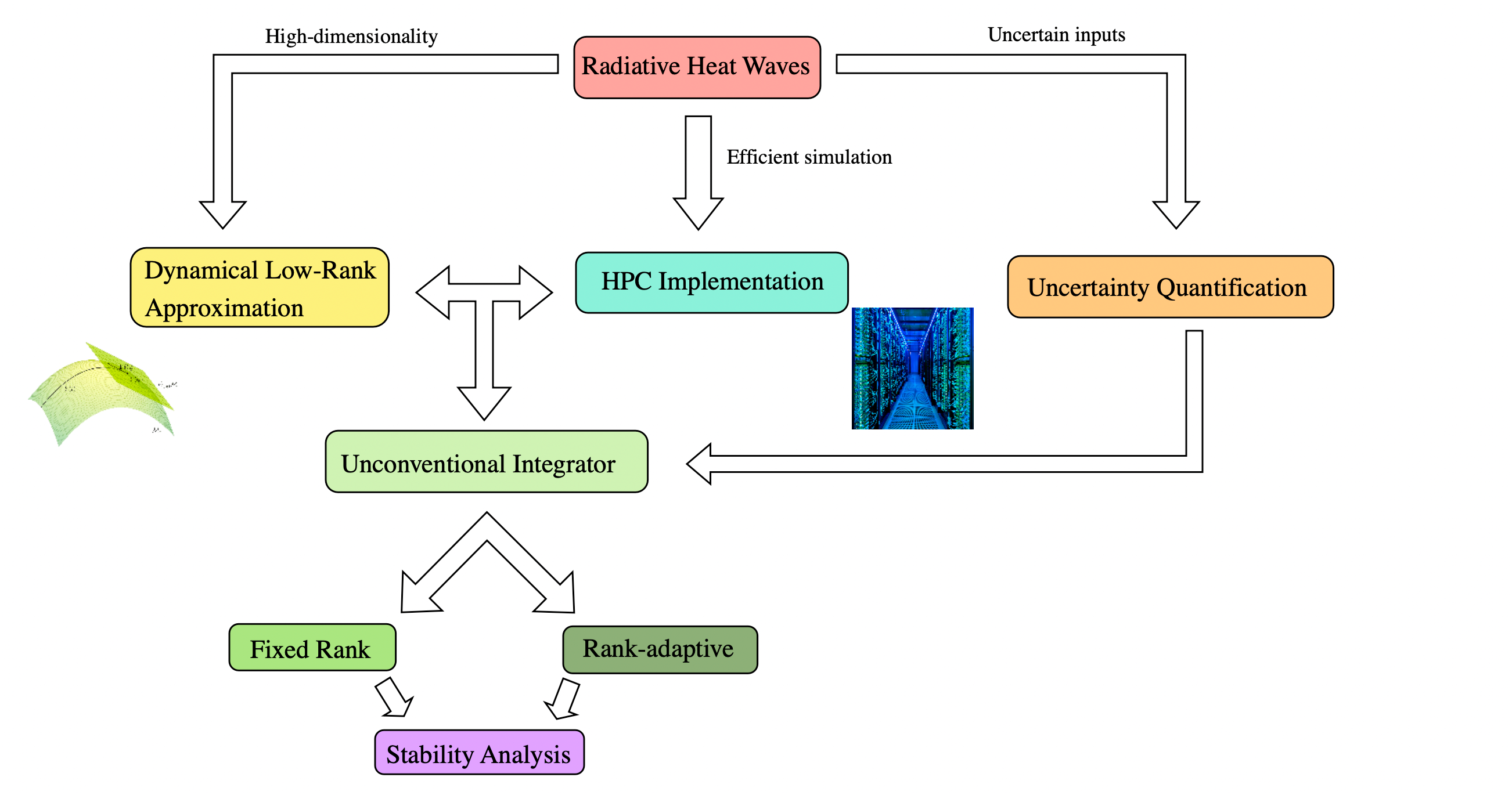 An interesting problem in the study of radiation phenomena is the penetration of radiation from a hot source into a cold material. As the material heats, a wave of thermal energy starts to propagate into it. Such propagating radiation fronts are called Marshak waves. Practical examples are the penetration of stellar radiation into the interstellar medium (star formation or supernova explosion), the radiation emitted from a hohlraum striking a fusion target, or laser wakefield acceleration through pressure waves [Mar58, Mih84, ZR67]. All of these examples are of current interest in applications and are still challenging for high-performance computing (HPC) simulations.

Equation \eqref{eq:RadTransfer1} describes the dynamics of the photons that undergo isotropic scattering and can be absorbed by a background medium. This absorption of particles leads to an increase in the temperature of the background material according to \eqref{eq:RadTransfer2} which in turn emits blackbody radiation at its temperature. The coupling of the two equations is not only due to absorption but also due to the fact that the interaction cross sections of the medium depend on both, the frequency and the temperature. The phase space of the problem is high-dimensional (3 space, 2 angle, 1 frequency) and thus the problem is challenging to solve numerically. However, in relevant physical regimes there are indications that the actual dynamics take place close to a low-dimensional manifold, the Rosseland diffusion limit [LPB83]. 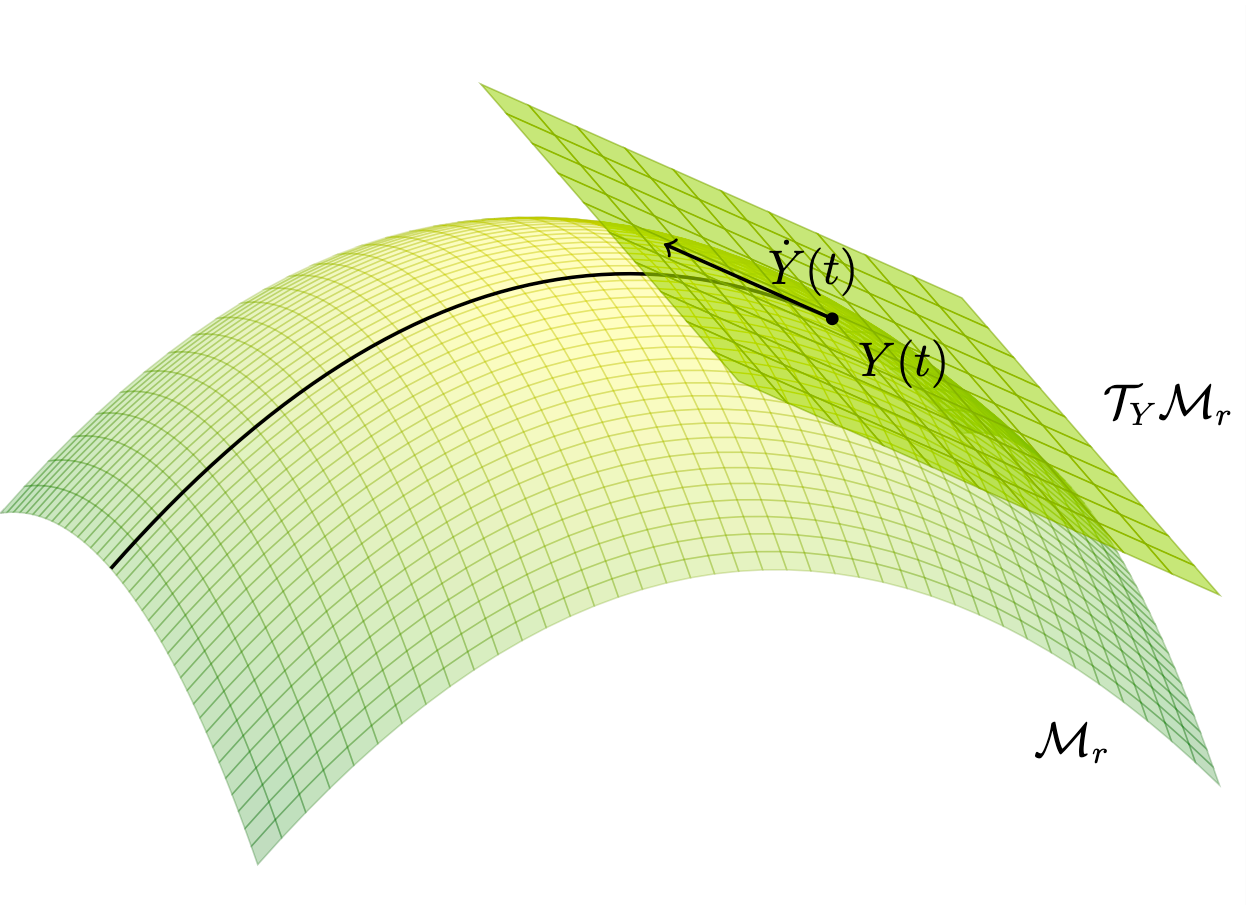 The dynamical low-rank approximation (DLRA), with its origins in quantum dynamics [Dir30, MGW09, MMC90], was mathematically analysed in a series of papers [KL07, KL10, Lub08, LRSV13]. Originally, it was proposed for matrix differential equations (MDEs) and then later extended to tensors [KL10, LRSV13]. The original method, as proposed in [KL07], is based on using an SVD-like ansatz for the low-rank solution of the given MDE, $\dot{Y}(t) = F(Y(t))$, where $Y(t),F(Y(t))\in\mathbb{R}^{m\times n}$. The right hand side of the MDE is then projected onto the tangent space ($\mathcal{T}_{Y}\mathcal{M}_{r}$) to the low-rank manifold ($\mathcal{M}_{r}$) at the current approximation ($Y$). The resulting evolution equations are then solved using standard solvers. While the idea seems rather simple, it has become a cornerstone in simulation of high-dimensional PDEs with low-rank solutions and sparked a greater interest in computational kinetic theory (CKT) [EL18, EL19, EJ21, DEL21].

A major breakthrough for the time integration of these reduced differential equations was achieved by decomposing the tangent space projection into three sub-projections and then applying a projector-splitting method [LO14]. This is known as the projector-splitting integrator (PSI) [LO14] in the literature. One of the key advantages for CKT is that using the method reduces both the computational effort as well as the memory footprint from $\mathcal{O}(mn)$ to $\mathcal{O}(mr + nr + r^{2})$.

Since the number of basis vectors that may be required to resolve the solution is not known beforehand, the rank is usually over-approximated. Additionally, since the required number of basis vectors may change over time, rank-adaptivity is an essential extension for DLRA. This is done in a straightforward manner for the UI by including basis vectors of the previous time step to expand the current set of basis vectors [CKL22]. This is followed by a Galerkin step using the augmented basis. The proposed basis augmentation step in the rank-adaptive UI adds further desirable properties such as norm conservation [CKL22].

Stability of UI and PSI

The choice of PSI or UI to solve the evolution equations, arising from DLRA, becomes an important factor when considering stability in hyperbolic problems. While the UI yields smoother solution profiles for first-order moments (such as scalar flux in radiation transport), it heavily dampens higher-order moments [KCEF22]. In contrast, the PSI provides a more adequate representation of higher-order moments while producing oscillatory first-order moments [KCEF22]. Additionally, it is also not clear how to choose a CFL (Courant–Friedrichs–Lewy) condition for DLRA. In [KEC23] these questions are investigated and a new stability analysis for the non-linear DLRA equations is presented along with a stabilisation for PSI based on performing DLRA in continuous form.

Simulating Marshak heat waves is a computationally expensive problem (see Introduction for explanation), thus to obtain a numerically efficient method [CFK22] propose using DLRA as a model reduction technique. This has been performed in conjuncture with a discontinuous Galerkin discretisation in space and spectral approximation in angle. The resulting simulations using PSI and UI agree very well with the reference solution (full method without DLRA) while requiring only 5.8% of the time required to compute the reference solution. In the following figures, the UI is referred to as "BUG" integrator standing for basis update & Galerkin integrator.

Radiation therapy is a medical procedure to treat cancer which uses high-energy particles to irradiate cancer cells and destroy them. The continuous slowing down (CSD) approximation [LMFB97] to the linear Boltzmann equation provides an accurate model for the transport of particles through the human body. This allows for the calculation of the dose of irradiated particles at the target site. The integrators developed in this project were used to resolve the dynamics of the collided particles in a collided and uncollided split of the linear Boltzmann equation, while an efficient full-rank solver was used for the uncollided particles [KS22].

In a large amount of applications, that can be modelled by hyperbolic conservation laws (e.g. radiation transport), uncertainty is observed in its input parameters (e.g. initial-, boundary conditions, or modelling parameters). These uncertainties may arise as a result of modelling assumptions as well as measurement or discretisation errors and can heavily influence the behaviour of the system at hand. Uncertainty quantification for hyperbolic problems poses several challenges, such as spurious oscillations [MKNG04, Bar13, DWB13], the loss of hyperbolicity [PDL09], or the exponential growth of the number of unknowns when the dimension of the random domain increases. DLRA can be used to mitigate the high computational cost and memory footprint that may arise due to high-dimensional uncertainty and this has been done for uncertain Burger's equation in [KCEF22].